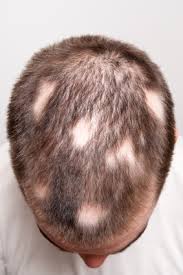 This is a typical disease in which Patients experience loss of hair which is not like the normal hair loss but rather a tufts of hair which tends to fall out over a short period of time, This tuft of hair loss commonly occur more on one side of the scalp than the other usually from the scalp. And there will be small bald patches, the underlying skin is unscarred and looks superficially normal. The patches can make any kind of shapes and usually they are round or oval shaped. The area of hair loss may be tingling or may be painful.

The typical symptom of the disease include failure of hair to regrow in theses patchy areas. This disease is commonly seen in Children. Hair will be seen pointed like a exclamation mark narrower along the length of the strand closer to the base, producing a characteristic “exclamation point”.

According to Modern science

Alopecia areata is due to the body’s failure to recognize “self” and destroys its own tissue as if it were an invader. In 1–2% of cases, the condition can spread to the entire scalp (alopecia totalis) or to the entire epidermis (alopecia universalis) that is other than beard it may occur on any hair-bearing part of the body.

Even when healthy hair is pulled out, hair will tend to pull out more easily along the edge of the patch where the follicles are already being attacked by the body’s immune system than away from the patch where they are still healthy.

Along with all these symptoms Nails may have pitting or trachyonychia

According to Science of Ayurveda

The two among the three vital doshas of our body Vata and Pitta get localized in the hair pores in the scalp region in aggravated condition and cause fall of tufts of hair in that particular region preventing further re – growth.

Ideology – Since the hair pores are covered with doshas our intention should be first to remove the covering of doshas over the scalp region, which will bring out re- growth of hair automatically. Later we will provide oils and drugs for external application which will enhance hair growth at the same time internal medicines which reduce pitta dosha by purgating etc is done according to the condition

The covering of doshas are removed by rubbing a leaf which is rough in nature over the scalp region. It is to be rubbed until small tiny blood lesion appears over the Scalp.

Instead of leaf Powder(Choorna) also is used to rub over scalp. After the appearance of blood a combination of drugs in powder form is used to cover over the blood appeared sites, when this wound heals hair growth will appear along with it.

Other methods in Ayurveda

This method is currently not in use, thi method include Application of Hasti Danta Masi( Char powder taken from elephant tusk) and Rasautha both mixed together in milk should be applied over Scalp region.

Ayurvedic treatment for Gridhrasi or Sciatica