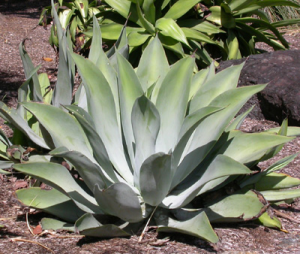 Agorve cantula is a Mexican native plant which is also seen in many parts of the world. It is a succulets with fleshy leaves which is spiney .It is being found in the Southern part too. It is available in Kerala and Karnataka too.It is having anticancer action .The flowers are used in ear troubles and the leaves are used in wound healing.

Fleshy, long leaves with spines on it.

Chief Mexican, agaves occur also in the southern and western united states and in central tropical South America. They are succulents with large rosette of thick fleshy leaves, each ending generally in a sharp point and with a spiny margin, the stout stem is usually shot, the leaves apparently springing from the root along with related genus yucca.

Each rosette is monocarpic and gross slowly to flower only once. During flowering, a toll stem or “mast” grown from the centre of the leaf rosette and bears a large number of short tubular flower. After development of fruits. The orginal plant dies but suckers are frequently produced from the based of the stem which become new plants. It is common misconception that agave are cacti. They are not rebile to cati, nor or they closely related to aloe whose leaves are similar.

Lipid constituents of the plant were identified as hentria cont – 25- enol.

Flowers are cream in colour.

The ethanotic extract of the rhizome and spirostanol constituents were shown proses sper micidal activities against human sparmatoza at 2% level.