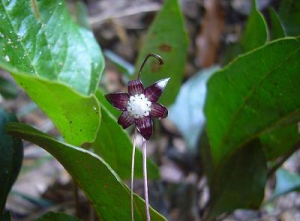 Trichopus zeylanicus is a small herbaceans plant, which is the only species of the family, the Trichopodaceae. Formerly it was attributed to. The Dioscoreoceae family. The leaves are about 2cm long and grow from a rhizome. The shape of the leaves can be highly variable even within one location, but the most common shape is cordate. The herb grows on sandy soil near rivers and streams in shady places in lowland and intermediate altitude forests. Its flowers year long and the fruits are thought to be dispersed by water. The unusual flowers are purplish black. The Malayalam name of the drug is arogya pacla And literally mean of the drug is arogya pacha and literally mean the green that green that gives strength.

They are about 20 cm

The herbs grows on sandy soi8l mear river and stream in shady places in lowland & intermediate altitude forests. It is distributed in Malaysia, Singapore, Srilanka, Thailand and the south western ghats mountains of South India.

It has been is use for centuries by the kaani tribal community of the agasthya koodam ranges in kerala, india. for its medicinal properties.

Capsule – I capsule per day

In December 1987, a term of scientists undertook a botanical field study into the forests of western ghats of southern kerala. Men from the local kani accompanied them. The leader observed that the men ate some fruits which kept them energetic and agile; the team when offered the the fruits during arduous trekking and upon eating, experienced renewed energy & strength.

The licence to provide jeevani was granted to Arya Vaidya Pharmacy. A regular supply of the leaves of the plant was required. Scientifiec studies revealed that the medicinal properties of the plant are best manifested in plants growing in natural habitat.

TBGRI suggested that only leaves of the plant are needed, several harvests could be made from the perennial plant without actually destroying it.

Plants grows only sandy soil near rivers and streams in shady places in lowland and intermediate altitude forests.it flowers year long and the fruits are thought to be dispressed by water.

No private parties would be involved in cultivation of this plant.

The drug is having great economic importance but it is being patented by Arya Vaidya Pharmacy leaves have been selled in Market.