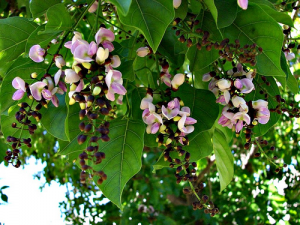 We come across the reference about karanja in rigveda and atharvaveda. Karanja sticks are forbidden for the rituals but described as the best among the tooth sticks. Ayurvedic text quoted it as the best tooth brush stick possessing katu rasa.

Karanja is mentioned among kadugna (anti pruritic) Varga by caraka. Susrutha highlighted the utility of karanjataila in krimi,kushta,prameha and siroroga(su,su,).

Susrutha and vaghbatahabve described a plant with the name karanjika which needs correct identity. However dalhana identified it as vrikshakaranja.

1) Nigantus have described four varieties. They are:-

2) Bhavamishra quoted three varieties. They are:-

1)Karanja : It’s a tree when grown in the banks of stream

Imparts blue colour to the water.

4)Gucchapushpa : They appear in bunches.

Barks, leaves and seeds are antiseptic,antipruritic and analgesic.

Powder of seeds is used for nasya. Also useful in various skin diseases and wounds.

Oil is used in vata disorders for massage.

Poultice of leaves removes the bacteria from wounds.

Paste of flowers is applied in alopecia. Hot leaves are also used.

Paste of leaves is useful in wound healing.

DIGESTIVE SYSTEM: – Being katu and tiktha it improves appettite and digestion. It is purgative anthelmintic and liver tonic due to ushnaabdteekshna property. Leaves are bark used in loss of apettite,digestivedisorders,constipation,helminthiasis and heamorrhoids. Oil derived from the seeds is given internally in helminthiasis.

CIRCULATORY SYSTEM:-Being bitter it enhances the blood flow and it’s ushnaguna reduces swellings. This effect is also augmented by its action on blood circulation. Effective also in rheumatoid arthritic swelling.

RESPIRATORY SYSTEM:-Being kaphagna.kasahara it is used in cough especially in whooping cough, powdered seeds in water are used.

URINARY SYSTEM:-Useful in urinary disorders as it reduces the quantity of urine by pungent and hot nature. Flowers are used in ikshumeha.

REPRODUCTIVE SYSTEM:-It’sushna and tikthaguna makes it keep the uterus in good condition.

SKIN:-Kushtagna, effective in all skin disorders. Karanja oil is best treatment for fatty ulcers of skin.

1) Granthivisarpa: – paste of karanja bark may be applied locally.

2) Romasanjanana:- kasisa and tender leaves of karanja are pounded with the juice of kapitha is useful.

3) Rakthapitta:- seed powder of karanja should be given with sugar and honey.

4) The roots are good for cleaning the ulcers.

5) It is good for cleaning the teeth and strengthening the gum.

6) Decoction of karanja. Nimbu and nitrgundi kill the organisms in wound.

7) Loss of hair: – kasis and tender leaves of karanja are taken and pounded with the juice of kapitha.. It is an excellent respiratory agent.

8) Piles: – tender leaves of karanja fried with the mixture of oil and ghee and added with purched gain flower should be given it acts as carminative.

* Paste of seeds is used in rheumatism.

* Bark paste is used in constipation and digestion.

* Seed oil is used in body massage during bath.

* Seed oil is used to apply in scabies.

* The juice of root is ysed foe ring worm.

* Leaves are tied along the neck of children in whooping cough.

* 1-2 spoon full bark infusion is given with a cup of warm water thrice a day during blood dysentery.

* Leaf juice mixed with the juiuce of neem, twice daily for seven days for malarial fever.

4)Karanjin showed good antibacterial activity against M.tuberculosis H37Rv,leading to complete inhibition of the growth of organism at a concentration of lOppm.(ramaswamy&sirsi 1960,1967)

Probably ranges from tropical dry to moist through subtropical dry to moist forest life zones. With standing temperatures slightly below 0° c – 5° c and annually rainfall of 5-25 cm, the tree grows wild on sandy and rocky soil. Mature trees can with stand water logging and slight frost this species grows to an elevation up to 1200m.

Seeds remaining viable for sometime require no special scarification direct snowing is usually successful. Seedlings transplant easily from the nursery after about a year. Root suckers are rather plentiful as well. If needed seeds are to be put in warm water for some period of time before sowing. Generally seeds do not need any pre treatment before sowing. Seed germinates within 2 weeks. It grows upto height of 25-30 cm and is transplanted. Later a pit of about 30 cm is appropriate for planting the nursery bud. 2-3 weeding are required per year for fiest 3-4 years of planting. In peninsular India the seeding season is April to June. Seed yield per tree is 10kg-50kg they remain viable in air tight conditioners. Usually pods are collected and shells are removed by hand. It is grown in 30 yrs for fuel in west Bengal. Plant starts giving yield from 5th year and benefit increases over years and stabilizes in 10th year.

OTHER THAN MEDICINAL USES

® Karanja oil is used in manufacture of soaps.

® Leaves are used as fodder and green manure.

® Wood of tree is used as fuel and for the construction of tool handles and agricultural implements.

® Pongamia pinnata with seeds powder with cowdung and cow urine, all mixed in 1:1 proportion fermented for 5 days is used as a mosquito repellant.

The whole controversy about Karanja is basically due to two names pithikaranja and cirabilva. According to authors both the names are the synonyms of puthika or cirabilva ie holoptereaintegrifolia planch. Therefore the name kantaki karanja is more suited for caesalpinia crista. While karanja is pongamia pinnata. It is important to note that karanja is mentioned in katuskandha and nakthamala in the thikthaskandha. On review several drugs are found described in two groups in carakasamhita. Therefore no significance shall be attributed to the synonyms used in separate groups. Bhavamisra quoted cirabilva as the synonym for karanji similarly ghrithakaranja is described with the synonyms puthika but not with kantakakaranja.