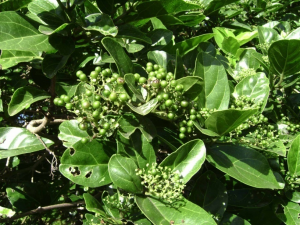 Agnimantha is a important plant during vedic period. It is the one among the Dhashamoolas. Its stem or sticks were used to produce fire. This plant is considered essential for rituals also, Agnimantha is best sothahara and vathahara drug. Like patala agnimantha is also found to be shothahara according to Charaka

Mostly found in the coastal areas in southern India, Kerala and Tamil Nadu and Western Coasts in dry regions. Flowering season in April and June. The wood in sometimes used for lighting fire by friction.[2]

It also found in Bangal & on the banks of Ganges. In hilly Regions from kumaan to Bhutan up to 15 thousands meter in sahyadri ranges and kongan.

Arani kashaya is mixd with water (boiled and cooled) and used both internally and externally.(G.N)

A compound isolated from root bark as active against gram positive organisms. (Naturwiss, 1964, 51, 484)

External application of the alcoholic extract of the leaf also reduces the oedema (Krishnamurthy et.al.1972)

The tree with which fire was lighted in the sacrificial cremonies by rubbing the sticks or wood together. This is the literal meaning of the word agnimantha. Controversy about Agnimantha is basically due to its variety. This is 2 kinds. (1) Laghu (small) (2) Vradha (Big). In charaka both are given as separate tree.

Agnimantha is called by some to be laghu type while Tarkari is big tree.

In south premna has been in use by vaidyas. In Gujarat and North cleroclendron is in use.

In varunadi gana susratha, both agnimantha and Tarkari are there; which means both are separate trees